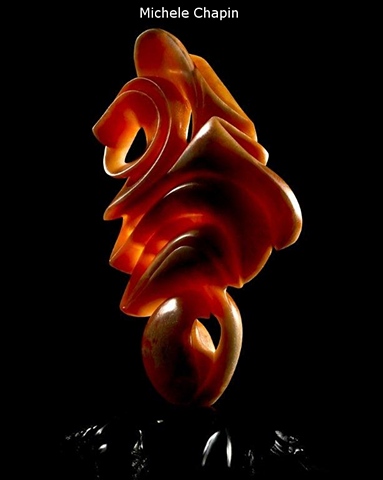 About The Artist Michele Chapin has been a working California artist for the past 30 years, exhibiting and receiving countless awards for her sculptures and contributions to the community where she has lived. She attended the University of California in Santa Cruz studying drawing, printmaking, jewelry, sculpting in bronze, clay and metal, art history and psychology. As a founding member of the Santa Cruz Art Center, she had the opportunity to work with several professional artists working in a variety of mediums, and it was there, she carved her first stone. In 1987, Michele relocated to Ventura and with the purchase of a minimal amount of tools, began teaching herself to carve. Many of her sculptures are created from stones that she has quarried from local deserts in California, as well as purchased from other states and countries. Her sculptures are often sensual, colorful, and translucent incorporating natural textures whenever possible. Desert Flower, a sculpture created for her first exhibit, was one of the first pieces purchased for the Ventura Municipal Art Collection on permanent display at City Hall. Her first major projects, collaborating with Richard Sanders, were creating works for the Ventura County Symphony Design House Gardens. These sculptures incorporated carved marble spheres that hydroplaned with the use of water. Later, she was commissioned to create and install a monumental granite sphere fountain commissioned by U.S. Sales Corporation in Moorpark, California. These fountains were the first of their kind to be created in the United States. In 2009, Mayor Christy Weir awarded her with the Mayor’s Arts Award for Artist In The Community. In 2010 The Ventura County Arts Council awarded Michele with the Salavador Bravo Art Star Award for Artist in the County. In July 2010 she was the first sculptor featured with a 3 month solo exhibition, at the grand reopening of the Ventura County Museum. The Museum showcased 14 of her stone sculptures, with major works on loan from private collections. In 2011 Divine Balance was purchased by the Museum for the permanent collection. In 2013 Michele showed for 3 months at the Santa Paula Art Museum a retrospect of sculptures including several new pieces with painter Susan Petty in their exhibition titled “Old Hands New Works”. In February 2014 Michele had a solo exhibit at Minan Gallery in Los Angeles "Chasing Beauty" featuring 25 colorful stone sculptures. This body of sculptures was inspired by a daily practice of taking close up photos with an IPhone 5 of roses prior to carving sessions in the studio. A selection of Michele's stone sculptures are on exhibit at the Post Ranch Inn in Big Sur. Her Studio and Gallery are open daily by appointment.